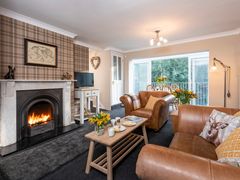 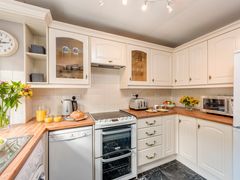 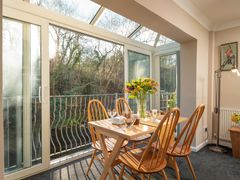 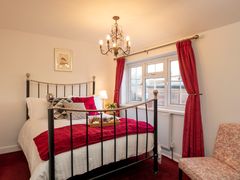 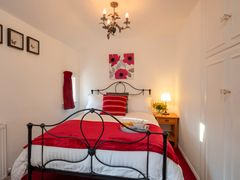 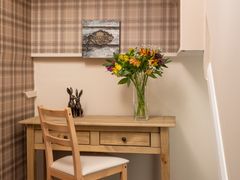 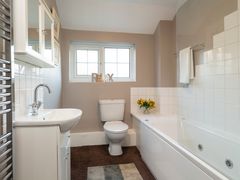 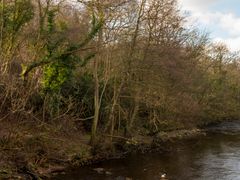 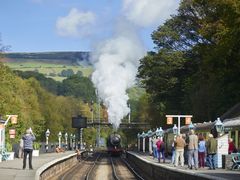 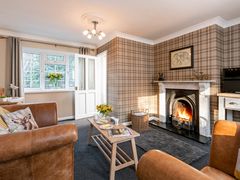 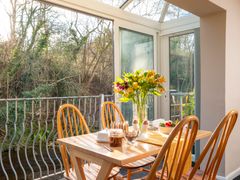 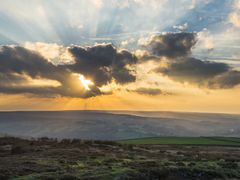 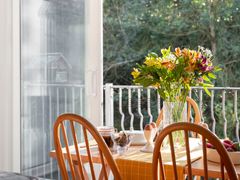 **NEW** A charming river-front cottage which has been newly refurbished and decorated, in a picturesque spot in the lovely village of Grosmont. Perfect for two couples or a family, this is a lovely property in a great location, just a two minute stroll to all the village amenities. Overlooking the tree-lined River Esk, simply open the French doors to the Juliet balcony and enjoy meals to its soothing sounds as it cascades along its way - an idyllic spot for a relaxing holiday - and you can even see the famous steam trains as the pass over the bridge! 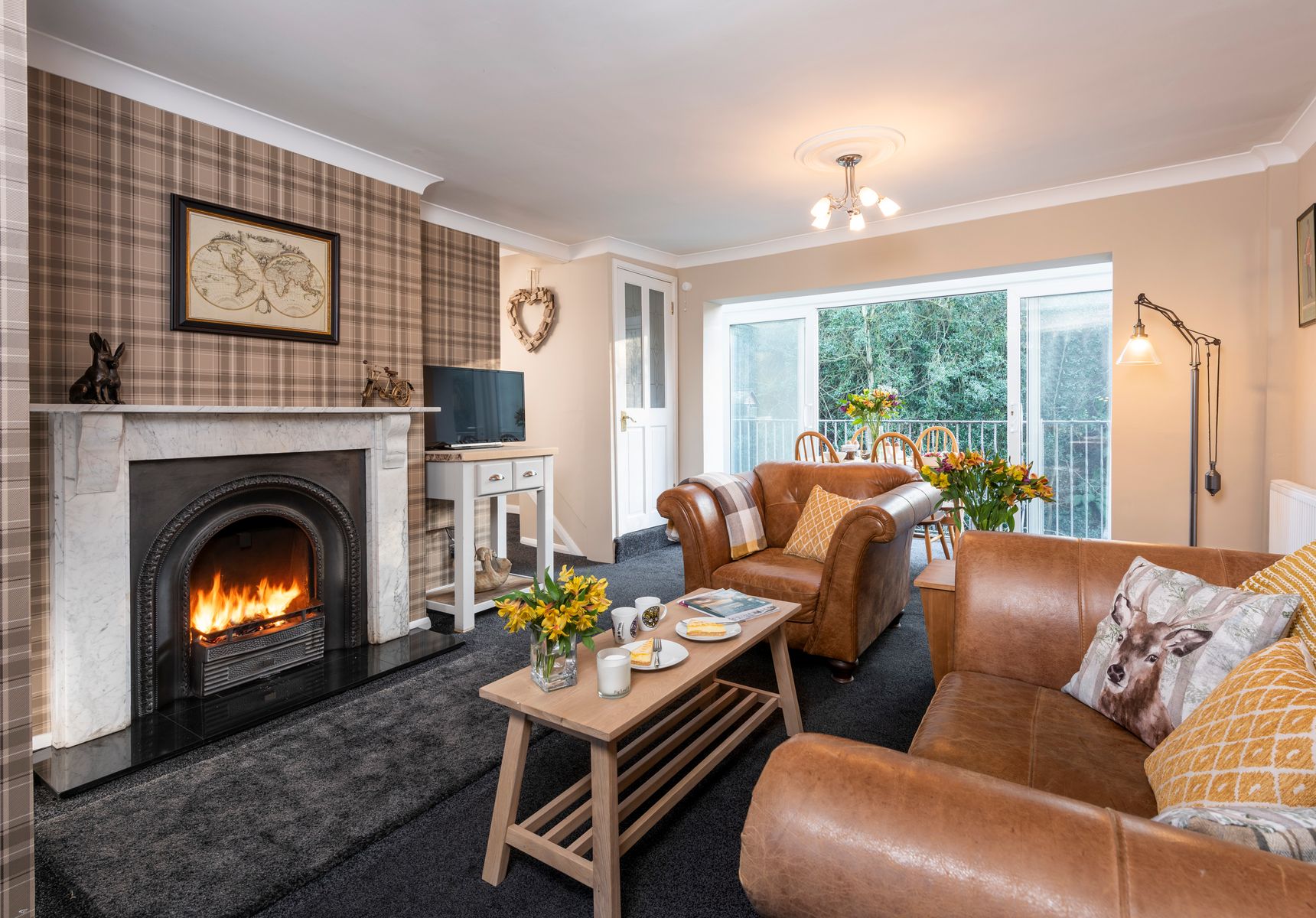 If the house is ever for sale - let us know

The location was wonderful; walks with the dog in every direction, character village and even pub over the road! Wonderful place to relax and we will re book. 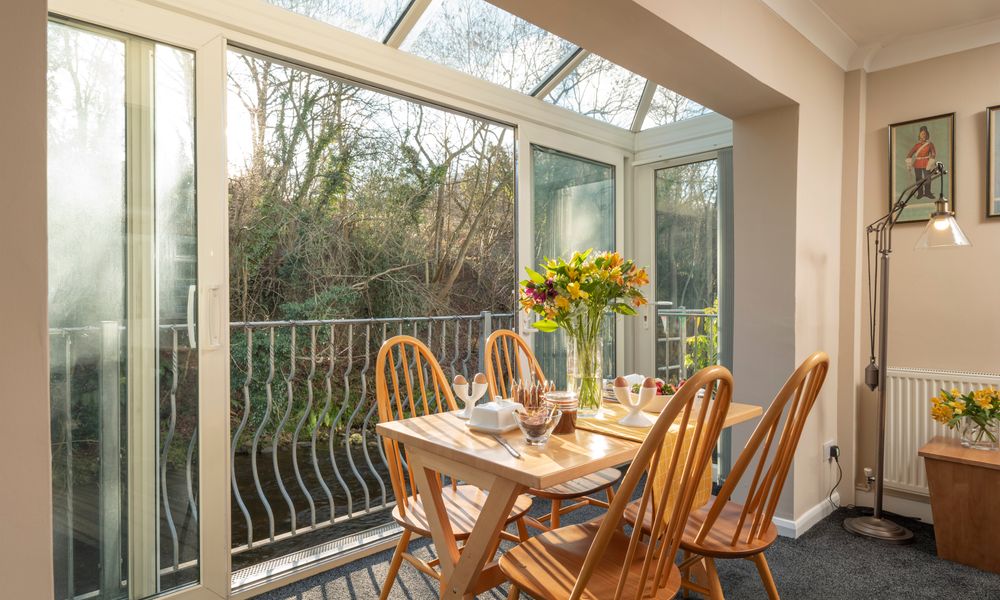 
Enter the cottage into the hallway, which leads into the smart, well-equipped kitchen with quality, cream painted Shaker-style units and beech work surfaces; it has an electric oven and hob, fridge/freezer, dishwasher, washer/dryer and microwave.

The sitting room is a good size with an open fire, which is wonderful to cosy up in front of during the cooler months, plus there's comfortable sofas to sink down into after a day's walking across the moors, sightseeing or sunbathing on the beach. A Smart TV enables you to access your NetFlix account so you can catch up on those programmes you've been promising yourself! There's also a small library of books available in the cottage to enjoy during your stay.

The dining area has glorious views, looking out over the lovely River Esk so you can enjoy meals whilst admiring the vista and listening to the water cascading below - so relaxing! There is a Juliet balcony plus a small balconied area outside to sit and sip your morning coffee as the sun comes up or enjoy a glass of chilled fizz before supper.

A corner of the living area has a small mezzanine area that is home to a desk and chair, a lovely spot to sit and read - or maybe write a few postcards to let friends know what a wonderful holiday you are enjoying in this charming village 'twixt the stunning North York Moors and Yorkshire's beautiful coast with its golden sandy beaches.


The cottage has two double bedrooms, one has a double bed in wrought iron and overlooks the river and the second bedroom has an elegant brass bed and overlooks the front of the property. Both bedrooms have a chandelier and built-in wardrobes offering plenty of storage.

The stylish bathroom has a Jacuzzi bath, a shower over, WC and hand wash basin within a vanity unit.


There is private parking for one car to the front; there is a small outside area overlooking the river with seating to sit and enjoy the view - maybe over a Yorkshire cream tea? - during the summer months. 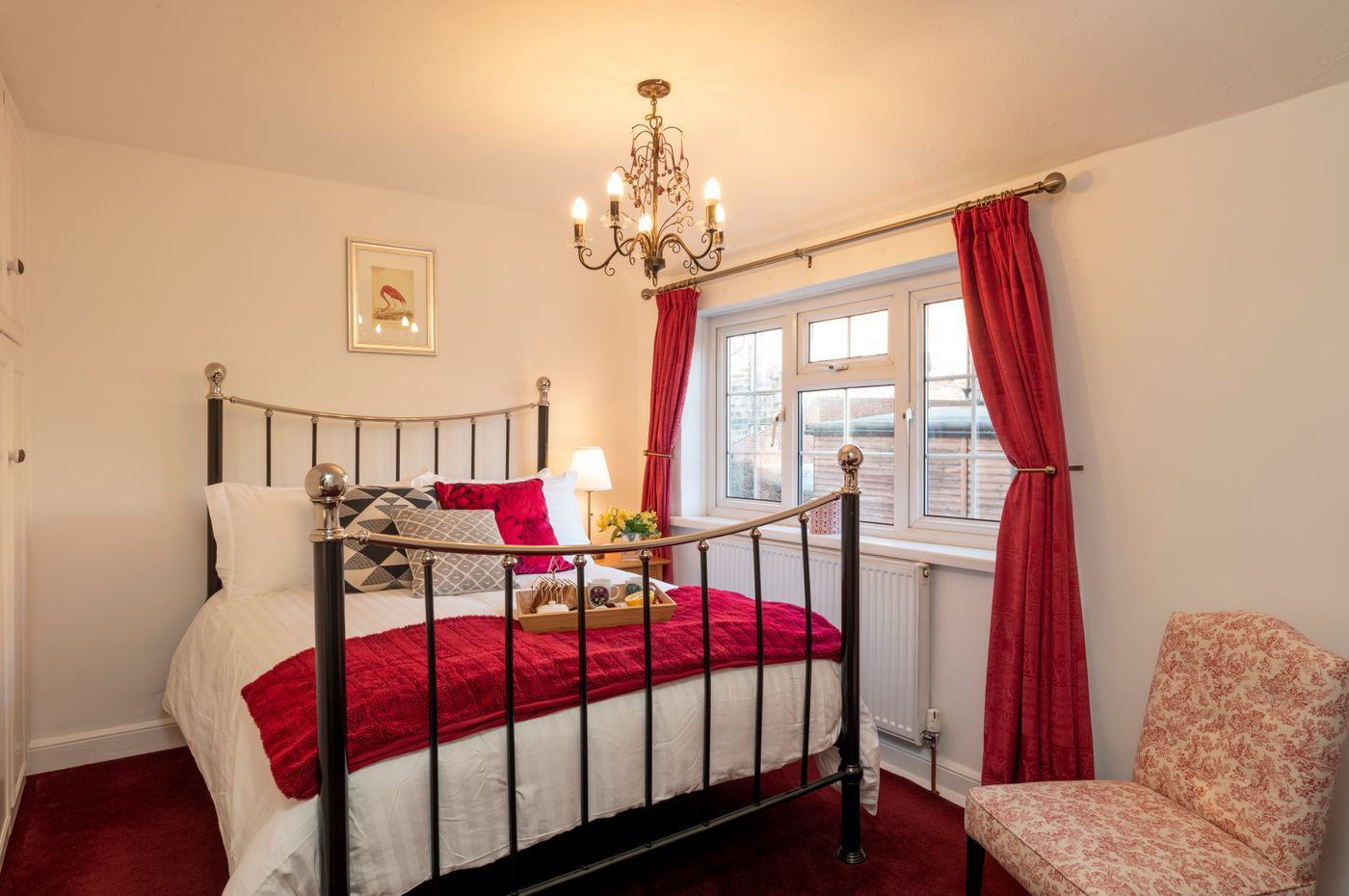 The pretty village of Grosmont sits at the junction of the River Esk and Murk Esk in the midst of striking North Yorkshire Moors scenery. The area is characterised by its narrow roads, steep hills and scenic views over valleys of patchwork fields and wide-open expanses of moorland. Grosmont itself lies in the ‘Heartbeat Country’ and is famous for being the home of the North York Moors Steam Railway. The Railway has been preserved and run by enthusiasts since 1973 and today carries upwards of 300,000 passengers a year. The village has a general store, post office, book shop, art gallery, cafes and a pub. It makes a great base for exploring the many pretty farming villages along the Esk Valley and the wider North York Moors National Park, as well as the North Yorkshire Coastline with characterful harbour towns and villages. 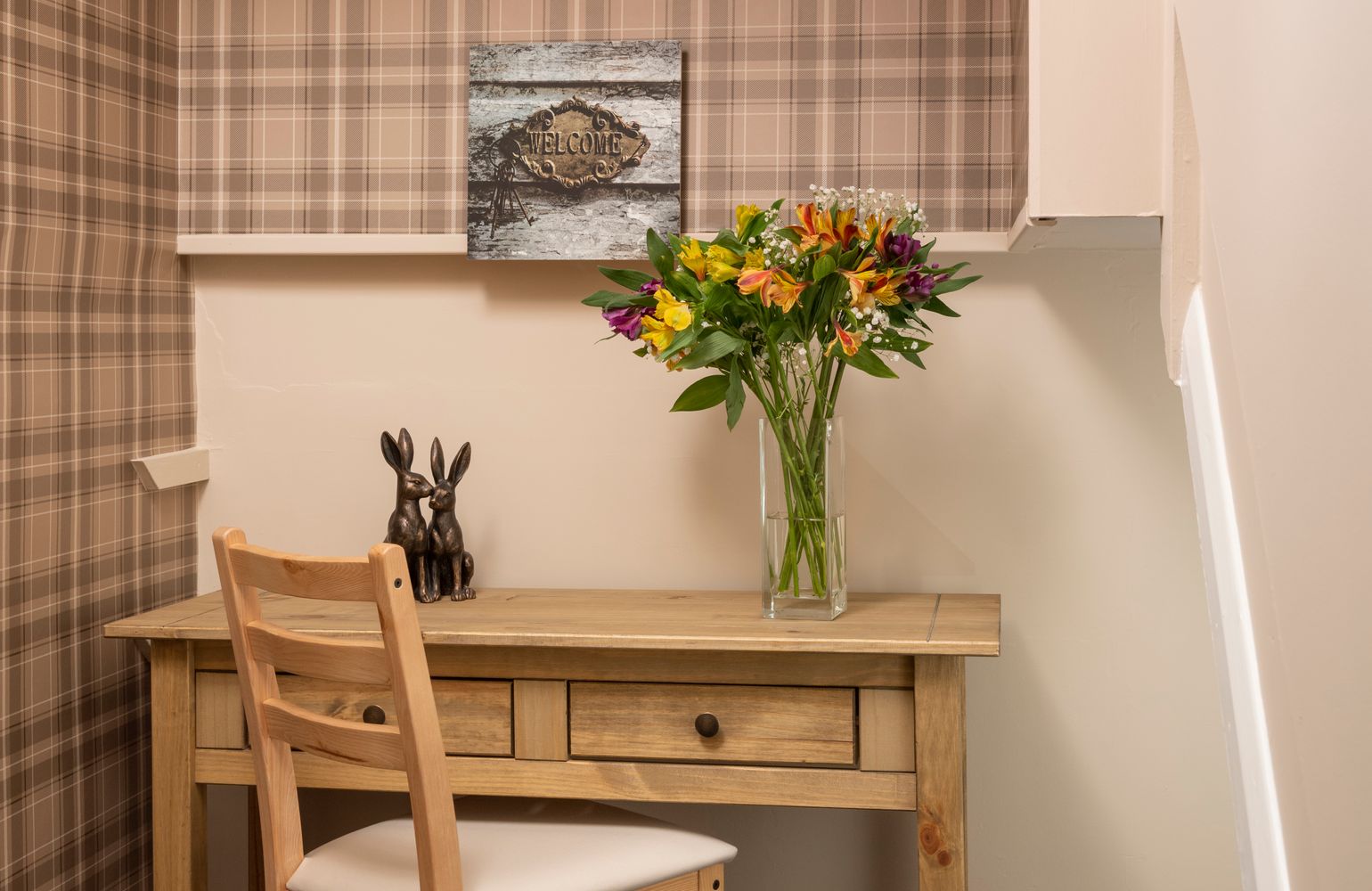 This holiday cottage was lovely, and the host even gave us a lovely little welcome pack - which we were not expecting

The place was clean and tidy, beds were comfy and the description was very accurate. The only down side was that we were expecting a fully working jacuzzi bath but this did not work - or we could not work out how to use it. I would recommend this as a place to stay

GROSMONT Grosmont is a charming village with the famous railway station through which you can watch the steam trains travel through – why not enjoy a ride and visit Whitby in one direction or Pickering in the other? There’s also a dining car at certain times of year which is a gastronomic delight! There’s a small Co-operative supermarket nearby plus lovely tea rooms and the village pub. NORTH YORK MOORS The cottage is on the edge of the beautiful North York Moors – perfect for hiking or even going cycling in Dalby Forest. The moorland is home to wildlife and is fantastic at every season – whether it’s wearing it’s vibrant green coat or purple heather. At certain times a year there are star gazing festivals – well worth a visit. Neighbouring villages are picturesque and are home to many country inns, some of which boast award winning dining experiences. WHITBY MUSEUM There’s many great exhibits that show the vast history Whitby really has. WHITBY ABBEY Situated on the top of Whitby’s East Cliff, it’s one of the most popular tourist destinations in the seaside town. ST MARY'S CHURCH Climb the famous 199 steps for glorious views of the harbour and the town of Whitby. CAPTAIN COOK MEMORIAL MUSEUM A wide range of art exhibitions on a regular basis or enjoy a tour of being informed on Captain Cook’s voyages of discovery. THE DRACULA EXPERIENCE Brave the Dracula Experience tour where you’ll hear the story of Dracula and the connections to Whitby. WHITBY BEACH The beaches are sandy and golden and the a pretty harbour – with its famous swing bridge – is edged with stylish wine bars and award-winning restaurants. WHITBY HARBOUR Catch Whitby crabs from the harbour or simply watch the sun go down over the old town. WHITBY GOTH WEEKEND / FOLK WEEK / REGATTA Why not come during the two Goth Festivals, during Folk Week or the wonderful Regatta? All of which are incredibly popular extravaganzas that take place annually.

Free Wi-Fi included
Starter pack of kindling/logs supplied during cooler months i.e. end-October – end March
Private parking for one car to the front (further parking facilities for an additional vehicle in the village)
A well-behaved dog is welcome at a cost of £30 per pet, per week

If the house is ever for sale - let us know. The location was wonderful; walks with the dog in every direction, character village and even pub over the road! Wonderful place to relax and we will re book.
Mrs Jorgensen
This holiday cottage was lovely, and the host even gave us a lovely little welcome pack - which we were not expecting. The place was clean and tidy, beds were comfy and the description was very accurate. The only down side was that we were expecting a fully working jacuzzi bath but this did not work - or we could not work out how to use it. I would recommend this as a place to stay
Mrs Harwood-armitage
We thoroughly enjoyed our holiday - found the cottage delightful , full of character , very relaxing & very well equipped . Location superb - loved the river views , steam railway , walks from the cottage k local cafes Our party comprised 2 elderly & 1 middle aged so the only drawback for us was that we found the settee too low & uncomfortable .Availability of higher/ easier to get in & out of armchairs with greater back support would have made the experience complete perfection for us . The beds were bliss - so comfortable . Thank you very much for enabling us y
Miss Cook
Lovely long weekend break. Great view over the river and spent time bird spotting from the window seating. We went to Whitby on the steam train and walked along the 'Rail Trail' from Grosmont to Goathland. As for the cottage, don't change a thing! Everything we would need for a break away in the country. Well done to the owners. Fantastic place to stay and I hope it brings you much joy. Hope to stay again!
Alan Brown
Great cottage in a good location! Lots of trips on the steam trains. Good view of the Tour de Yorkshire in Whitby and Grosmont.
Chris and Sue
Lovely seating area with doors opening to the River Esk. Wonderful trip to Whitby by train. Had wonderful food at Postgate in Egton. A lovely bath too! Thank you to the owners for all their efforts!
Pam and Tony
Lovely week with fantastic weather. Cottage everything we could ask for. Enjoyed watching the steam trains over the bridge. Loved feeding the birds on the bird table, even saw a Kingfisher. Can recommend the Rail trail from Goathland to Grosmont even saw some deer. Loads of lovely places to eat locally in particular 'The Fox and Rabbit' on the Whitby to Pickering Road. Will definitely be back thanks for making our stay comfortable.
Shaun and Janet, Farnborough Hamps.
Well....we finally found this wonderful diamond - a place to switch off. There is nothing negative for us to say regarding the cottage. What is not to love? It has been a sheer joy waving at the train travellers, walking around the village and catching the steam train to Pickering. We will 100% come back. Thank you.
Tracey and Craig Chaplin
Very relaxing break. Loved Grosmont, felt I was stepping back in time. Visited Sandsend, Staithes and Saltburn. All well worth the trip.
Pamela and Stephen
We have just arrived at the cottage and what can we say...WOW it is beautiful. You have made it so warm and welcoming. ....... We have had such a lovely time, thank you for everything you did to make our weekend very special
Linda, Chris, John and David. 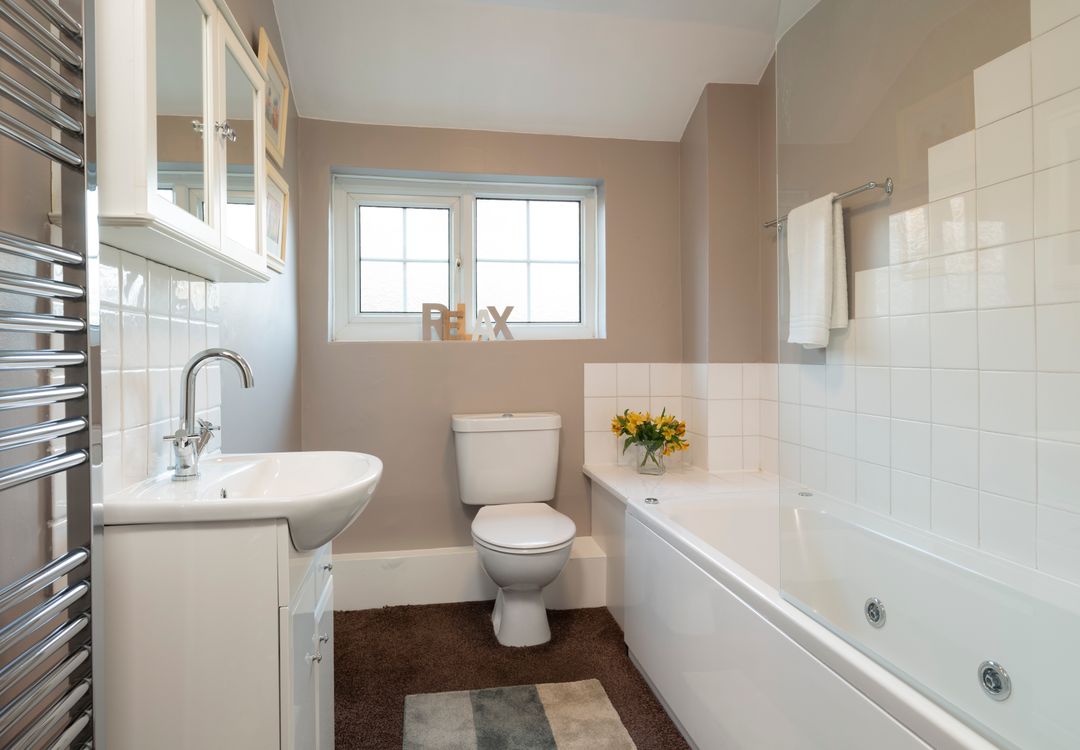 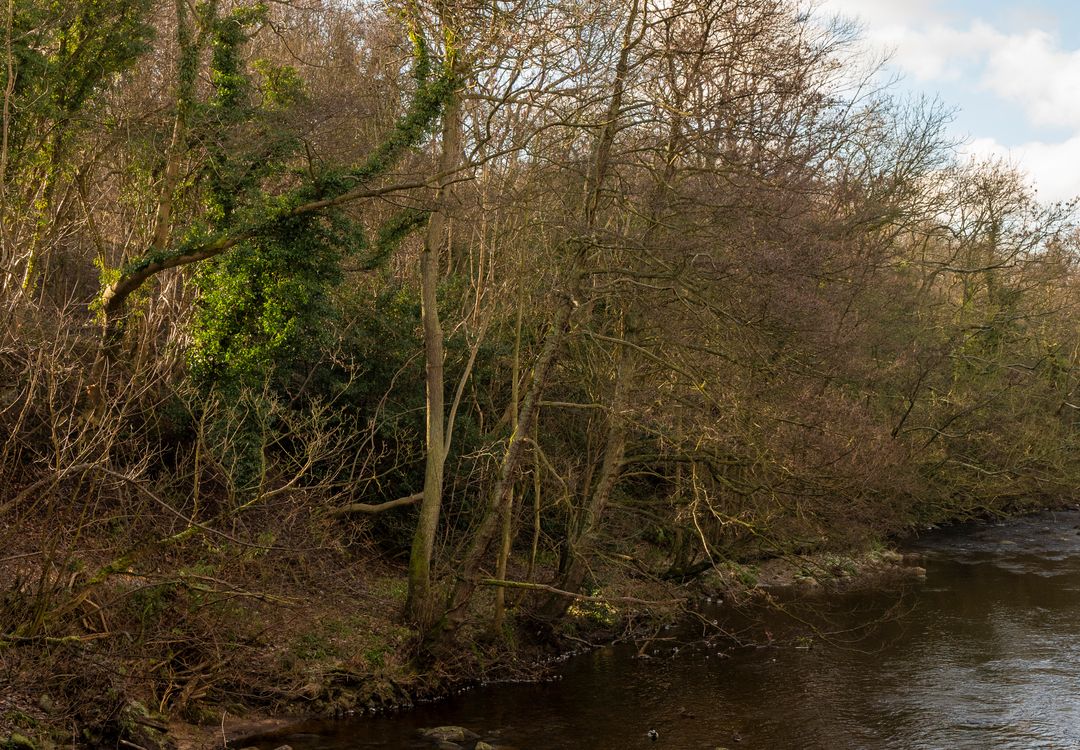